The following quotes are from John Bunyan's book "Holy War". The book is written in typical Bunyan allegorical style but the truth it reveals is no myth. Chapter 16 begins with "Diabolus" calling "for a council of war" with the "princes of the pit", to discuss how to be revenged on the city of "Mansoul". The forces of evil were frustrated because all their efforts had so far failed. John Bunyan continues:

"Then Lucifer stood up and said, The counsel of Beelzebub is pertinent; now the way to bring this to pass, in mine opinion, is this: Let us withdraw our force from the town of Mansoul, let us do this and let us terrify them no more, either with summons or threats, or with the noise of our drum, or any other awakening means. Only let us lie in the field at a distance, and be as if we regarded them not; for frights I see do but awaken them, and make them stand more to their arms.

I have also another stratagem in my head: You know Mansoul is a market town; and a town that delights in commerce; what therefore if some of our Diabolonians shall feign themselves far countrymen, and shall go out and bring to the market of Mansoul some of our wares to sell; and what matter at what rates they sell their wares, though it be but for half the worth. Now, let those that thus shall trade in their market, be those that are witty and true to us, and I will lay my crown to pawn it will do. There are two that are come to my thoughts already, that I think will be arch at this work, and they are Mr. Penny-wise-pound-foolish, and Mr. Get-I'th'-hundred-and-lose-I'th'-shire* nor is this man with the long name at all inferior to the other. What also if you join with them Mr. Sweet-world, and Mr. Present-good; they are men that are civil and cunning, but out true friends and helpers. Let these with as many more engage in this business for us, and let Mansoul be taken up in much business, and let them grow full and rich, and this is the way to get ground of them; remember ye not that thus we prevailed upon Laodicea, and how many at present do we hold in this snare? (Rev3:17) Now when they begin to grow full, they will forget their misery, and if we shall not affright them they may happen to fall asleep, and so be got to neglect their town-watch, their castle-watch, as well as their watch at the gates. Yea, may we not by this means so cumber Mansoul with abundance, that they shall be forced to make of their castle a warehouse instead of a garrison fortified against us, and a receptacle for men of war. Thus if we get our goods, and commodities thither, I reckon that the castle is more than half ours. Besides, could we so order it, that it should be filled with such kind of wares, thin if we made a sudden assault upon them, ot would be hard for the captains to tale shelter there. Do you know that of the parable, The deceitfulness of riches choke the word. (Mark 4:19) And again, When the heart is overcharged with surfeiting and drunkenness, and the cares of this life, all mischief comes upon them at unawares. (Luke 21:34-36) Furthermore, my lords, quoth he, you very well know that it is not easy for a people to be filled with our things, and not to have some of our Diabolonians as retainers to their houses and services. Where is a Mansoulian that is full of this world, that has not for his , and waiting-men Mr. Profuse, or Mr. Prodigality, or some other of our Diaboloian gang, as Mr. Voluptuous, Mr. Pragmatical, Mr. Ostentation, or the like? Now these can take the castle of Mansoul, or blow it up, or make it unfit for a garrison for Emmanuel; and any of these will do. Yea, these, for aught I know, may do it for us sooner that an army of twenty thousand men.

Wherefore, to end as I began, my advice is, that we quietly withdraw ourselves, not offering any further force, or forcible attempts upon the castle, at least at this time, and let us set on foot our new project, and lets see of that will not make then destroy themselves.

This advice was highly applauded by them all, and was accounted the master-piece of hell; (emphasis added) to wit, to choke Mansoul with a fullness of this world, and to surfeit her heart with the good things thereof".

The above quotes are from the book "Holy War" by John Bunyan. This book is written in classic Bunyan allegorical style, and if you read and enjoyed Pilgrims Progress you will love this book. The truths it contains will bless you, and although this is not Bunyan's most popular book, I think it is his best. I give it 5 stars. 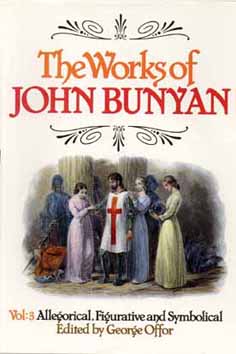